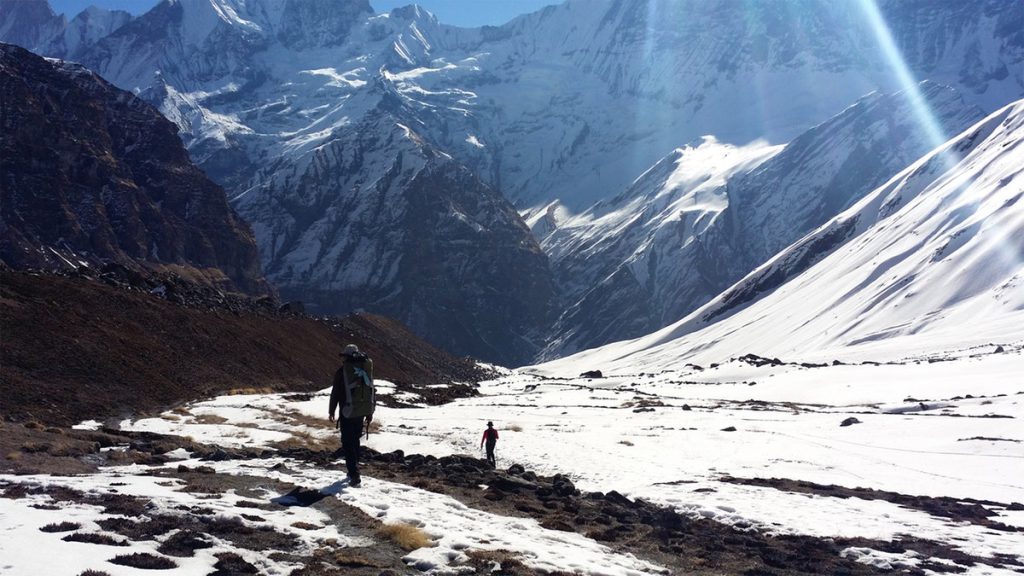 The Himalayas have always been a huge draw to every keen hiker. This mountain range is home to 9 out of 10 of the highest peaks on earth, including the renowned Mount Everest and K2. Photographs and testimonials of those who have trodden the range sing endless praises of its beauty, making the Himalayas the mecca of hiking – the item to tick off from the enthusiast’s bucket list. It is definitely mine and my other 22 mates. Since the range has many peaks, we decided to start from the very beginning – the ABC of the Himalayas, or Annapurna Base Camp. Some have asked, “Why not the trek to Everest Base Camp instead?” Other than it being my first attempt (some fellow hikers have attempted thrice), there is a certain allure to Annapurna that would pretty much make it an exciting trip on its own.

DAY 1 – BEGINNING OF THE TREK

After 8 hours, we arrived at Nayapul to sort out our hiking permits – getting them checked and stamped by the local authorities. From there, we continued our journey to Siwai for another 30-minutes-long bumpy bus ride on the dirt roads. Thoroughly through with the buses, we started walking to New Bridge for about 1.5 hours. After filling ourselves with some much-needed fuel, we headed for a long uphill climb to Chommrong, where we would spend the night.

We started our trip with a bus ride from Kathmandu to Nayapul. For first-timers like myself, the bus ride was truly an experience. Despite its size, the driver skilfully manoeuvered his charge on the one-lane highway with such daredevil overtaking moves that I was highly amused that we managed to stay alive for the entire duration of the road trip. Looks like our adventure has already started before even reaching the foot of the mountain!

It was a frigid morning when we got up from our beds. But never mind the cold as we all rushed to the rooftop of our guesthouse with the first thing in our minds – to catch the Himalayan sunrise. What majesty presented ahead of us!

UPS AND DOWNS THROUGH THE FOREST

The trek after the guesthouse led us to a downward climb towards a valley and we had to cross a bridge before we found ourselves climbing up the hill again. Along the trek, we saw a vast expanse of paddy fields planted by the hillside with rice that tasted different from what we have back home. We lunched at Bamboo, where we admired the change of scenery from the paddy fields to a forest canopy. While we were optimistic about the following trek, the heavens decided to bless us with rain. Lots of it.In fact, we trekked in 4 straight hours in the downpour from Bamboo to Himalaya, arriving our guesthouse completely drenched. To dampen our spirits further, none of our gears, waterproofed or not, survived the downpour.

Since our equipment suffered a thorough soak-through the day before, we decided to postpone our initial schedule of trekking to the Machhapuchhre Base Camp, using this day to dry out the gear as well as mend our torn shoes instead. Thankfully, we have accommodated our schedule for incidents such as this. As we waited out the laundry crisis, we peeled onions and built bonds with each other while the surrounding mountains and snow-capped peaks continuously teased their invitation. It really took some Odysseus effort to not be tempted by their voices and to wait patiently, admiring their beauty only from afar.

Finally, the wait was rewarded. Without further ado, off to Machhapuchhre Base Camp (MBC) we went.

As we got onto the trek from Deurali to MBC, the Himalayan trail welcomed us with a dramatic variation of wonders. Basked in the sunlight that bounced off from one glorious snow-capped peak to another, we trekked along the clear waters of the mountain river to pass through a series of ragged cliffs looming over us. We even witnessed some small avalanches due to the snow build-up on the steep slopes. There were simply no words to describe what we saw. The only thing I’d dare say is that we were all humbled by the towering majesty surrounding us.

Blue roof! The moment we saw it, we knew we were near the base camp (all guesthouses in the ABC trail are covered with blue roofs). We spent about 1 hour to rest and have lunch. After that, we were on trek again to Annapurna Base Camp (ABC) where we spent the night there. The mountain valley continued to open up to a wider landscape where we found ourselves walking on snow and slush.

SO NEAR YET SO FAR

An hour into the hike from MBC, we caught a glimpse of another familiar blue roof from afar. It had to be the Annapurna Base Camp guesthouse. Naturally, we thought we were pretty close. How our minds tricked us! The journey to the base camp actually took us a good 3-4 hours.

In spite of that, we were happily distracted by the view around us as we took frequent pauses to soak in the beauty. Perhaps the length of the duration was a blessing in disguise. Continuing on, however, we walked right into an upward fog from the valley, where the temperature and visibility dropped substantially. If it were not for our sherpas, we would have been utterly lost.

As soon as the fog cleared, we continued on our trail. Occasionally, we would turn back and see the Machhapuchhre peak behind us. The peak, also known as “fishtail” for its formation, is a sacred mountain to the locals. We learned that it is dedicated to the Hindu god Shiva and has been closed to the public since 1957.

THE FINAL LOOK ON THE FISHTAIL

Finding our way to ABC checkpoint.

Finally! Here is the mandatory touristy picture while the other two expedition members clowned around at the back.

As we headed back to Sinuwa to continue on the rest of our trip, we left with mixed feelings. Despite our challenges, the weather, and sore muscles, the sights and sounds of the trail were etched onto our minds and hearts. A few days ago we would have chided ourselves with our good sense. Now that we have seen the impressive grandeur of the Himalayan range, we could not wait to be back again. Next trip: Everest Base Camp, perhaps?

Footnotes: This is an adventure log written by Adrian and edited by Bekah. We want to thank Roslee and Firdhaus for their photo contribution. All of the photos were taken by mobile phones.