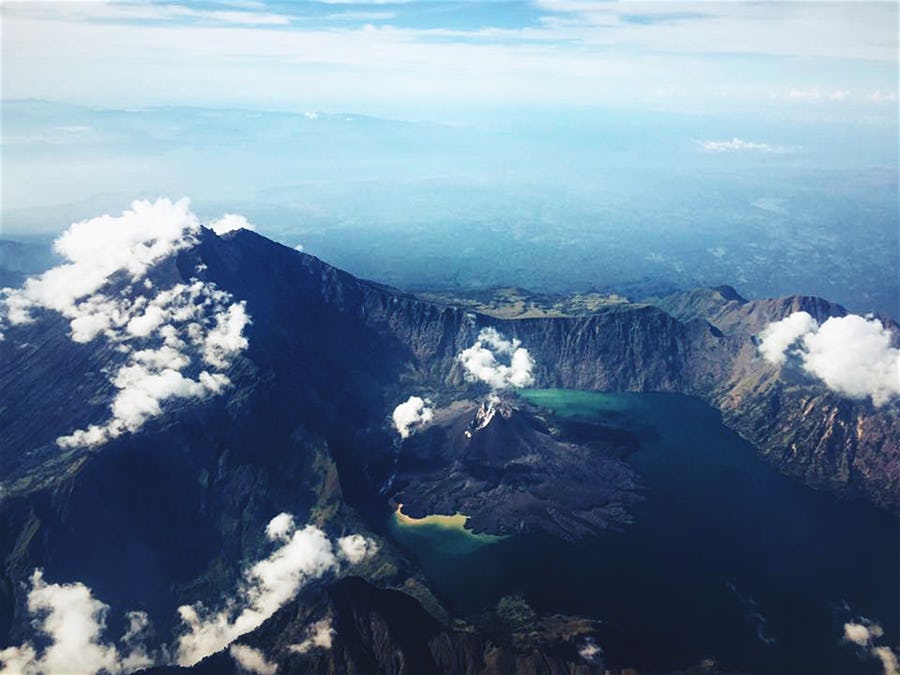 I remember it was one afternoon in 2014 that I showed a beautiful camp site in British Columbia to a friend asking him if there’s such a place in our neighbouring countries. We laughed, incredulous at the existence of such a place in Asia. How wrong we were… Weeks later, just as we were about to forget our conversations on this, my friend nudged me to look at something he found on the Internet. It was Mount Rinjani, and the sight was truly something worth exploring. I immediately fell in love without thinking very much. In fact, the moment I saw the images of the peak, I could almost feel myself standing exactly at that spot.

Without a much hesitation we gathered a few adventurous friends, booked air tickets and accommodation, hired local guide and porters (it was mandatory by Mount Rinjani authorities, trained ourselves physically, packed our bags and loaded ourselves to the plane. We all shared 1 burning desire : we want to witness the promised beauty.

We headed over to Rinjani Information Centre via jeep to perform standard hiking procedure which was to register and pay up the entrance fees. Along the road journey, you will start to notice the mountain ranges on the left and right.

The reality began to sink in as soon as we finished our registration. The trek began with a gradual ascent. As we were passing Pos III Pada Balong, the degree of ascension took a steep turn. Some inclines felt like it was a 40 degree hike. No wonder it was rated 7/10 by many reviews when comparing this mountain with others in Indonesia.

THE RISE ABOVE THE CLOUDS

We were blessed with a cloudy view throughout our entire hike.

As we were approaching Plawangan Sembalun where our base camp was situated, we could see the peak from where we stood.

Captivated by the awesome view, we hung around the spot for 15 minutes before we proceeded on with our journey.

30 minutes later, we were welcomed by a sea of cloud as we reached our base camp. The sight was simply amazing. All of us immediately put down our bags next to our camp, took out our phones and recorded this beauty. Each of us let out a gasp of wonder as we took in every detail of the sight before us. None of us could speak – we were stunned speechless. The good kind.

Plawangan Sembalun was simply the most beautiful camp site we have ever been.

Clouds were adorning their blue background throughout the evening. It was like rolls and rolls of cotton candy floating in the air. If we could lie on the these clouds, wonder how would it feel? Could be better than our sleeping bags.

We woke up at 2am the second day. Attempted our sunrise mission at 3am. The wind was blowing strong. – There were no trees or higher peaks to reduce the wind chilling us. We were entirely exposed to the elements. Too cold.

So we have done our research online about this last stretch and trained ourselves as much as possible to prepare for this, both mentally and physically. But the last milestone to the peak was incredibly tough.
Due to its volcanic terrain, the path was filled with pumice – rocks that contain high content of water and gases. This basically means that with one step up, you literally take two steps back, or in this instance, slide downwards, because the ground is just not solid enough. To make your trekking even more challenging, you couldn’t rest on them too long. Falling rocks and the soft ground would cause you to slide downwards further. Under such circumstances, you only have 1 option.
You have to keep moving, at a consistent pace.

We easily took 1 hour to complete the last 300m hike. So yes, we missed the sunrise. But hey, here we were, standing on a 3,726m high active volcano. Though only the 3 of 8 made it to the summit, our mission was considered complete. We ARE here NOW.

Perhaps the rest may come back to complete our unfinished business with this giant. Till then, Mount Rinjani, you’re my one true wonder.

Footnotes: This is a adventure log written by Adeline. She wishes to thank Leong Key, Adrian, Daniel Aw and Andrew Tan for their photos contribution. All of the photos were taken by iphone 4s and 6.

2 Replies to “BEAUTY OF VOLCANIC CLIMB”